English Premier League 2019: How To Watch Manchester United vs. Chelsea

This story was written in collaboration with Forbes Finds. Forbes Finds covers products and experiences we think you’ll love. Featured products are independently selected and linked to for your convenience. If you buy something using a link on this page, Forbes may receive a small share of that sale. 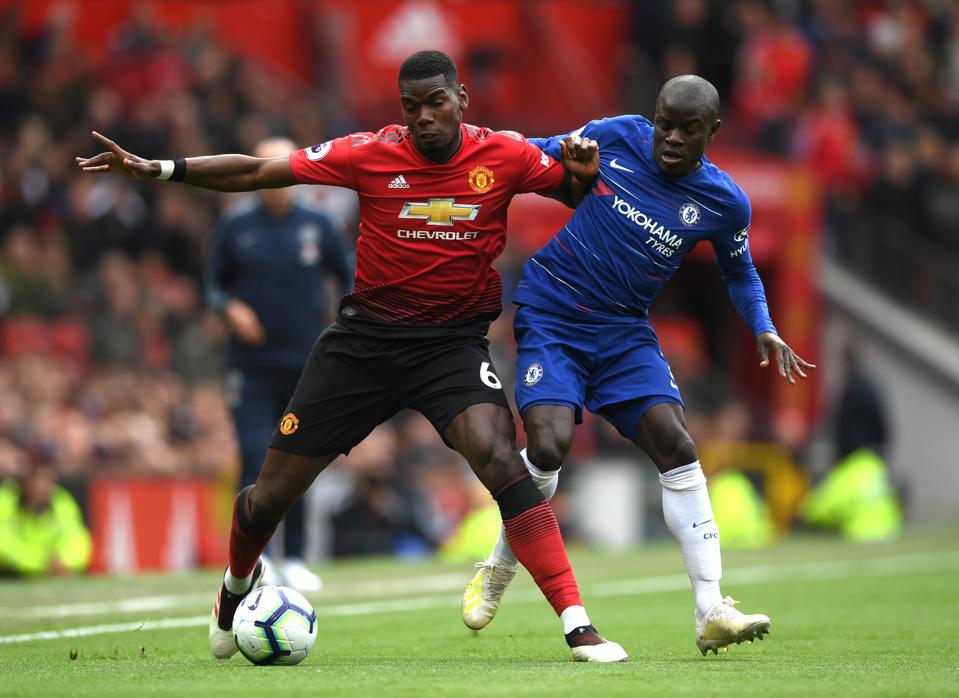 Reds vs. Blues: Paul Pogba of Manchester United holds off Chelsea's N'golo Kante during a match in April 2019.

(PHOTO BY SHAUN BOTTERILL/GETTY IMAGES)
Considering how many of the world's best teams compete in the English Premier League, clashes between elite clubs are a regular occurrence. This season, we get one such matchup on the first weekend. The main event of the first matchday of the new Premier League season takes us to Old Trafford on Sunday, August 11. at 11:30 a.m. ET, where Manchester United will square off with Chelsea (NBC Sports Network, Telemundo; streaming on NBC Sports Live, FuboTV, Telemundo Deportes en Vivo).

Last season was a struggle for United. Manager Jose Mourinho was sacked in December after accruing just 19 points from 17 matches and replaced by former player Ole Gunnar Solskjær on an interim basis. That interim tag didn't last long, as Solskjær began his tenure at Old Trafford with a 12-game unbeaten run that put United back in the running for the top four (which means entry to the Champions League). However, in March, things began to go south for the Red Devils, who failed to win any of their last five Premier League gamesand finished the season in sixth.

So the big question for United this season is which Solskjær is ready: the one who went 12 games unbeaten, or the one who went winless in his last five? To get his team up to snuff, Solskjær has attempted to remake last season's leaky defense (54 EPL goals allowed), signing fullback Aaron Wan-Bissaka from Crystal Palace and central defender Harry Maguire from Leicester for a combined $158 million. But even as the season begins, the squad isn't settled. Paul Pogba, the club's biggest star, has publicly angled for a move away from Manchester and could get his wish before the end of August. However, it seems likely he'll play in the opener against Chelsea.

Meanwhile, Chelsea had a reasonably successful campaign last season, finishing third in the league and claiming the UEFA Europa League title under Maurizio Sarri. But Sarri's tenure at Chelsea was limited to that one season, as he made the jump to Juventus this summer. Replacing him is club legend Frank Lampard, who did well in his single season managing Championship side Derby County. Managing Chelsea, of course, is a much bigger job that comes with a particular set of challenges, not least of which being his lofty status as a club icon. 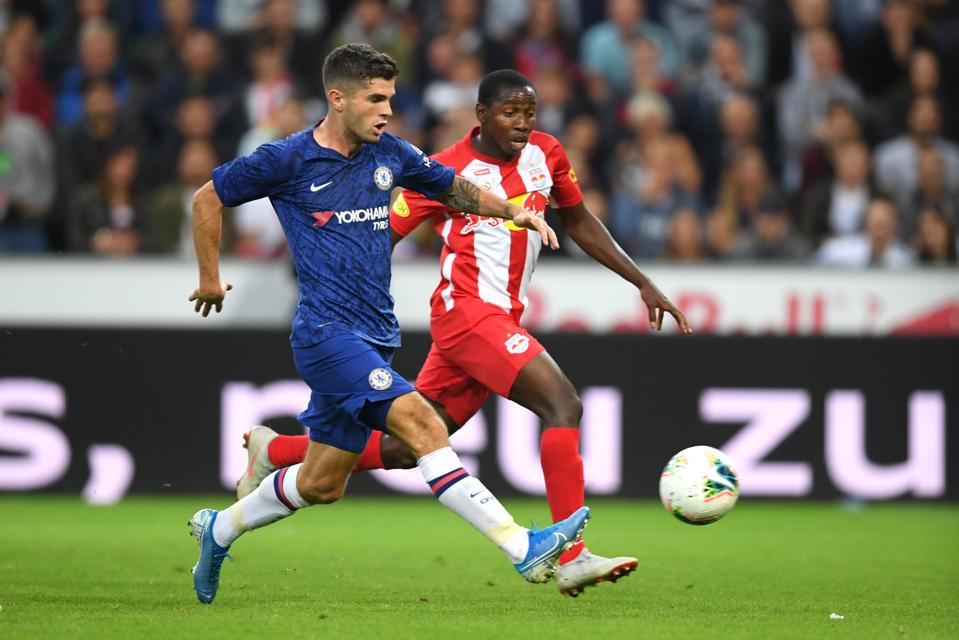 (PHOTO BY DARREN WALSH/CHELSEA FC VIA GETTY IMAGES)
The biggest issue Lampard and Chelsea must contend with this season is the transfer ban handed down by FIFA. Although Sarri's team did well last year, it wasn't without its issues and could have used some significant strengthening this summer. Instead, Lampard will have to rely on young talent from the club's academy to reenforce what he inherited.

He also has to cop with the departure of Eden Hazard—the club's talisman and top player for seven years—to Real Madrid. The most likely replacement for Hazard could be young American star Christian Pulisic, who sealed a move from Borussia Dortmund to London in January for nearly $73 million, making him by far the most expensive American player of all-time. Pulisic has impressed in preseason, scoring twice and winning a penalty in a friendly with RB Salzburg, and figures to be an important member of the squad in his first Premier League season.

Manchester United and Chelsea met three times in all competitions last season. The pair drew both Premier League meeting, 2-2 at Stamford Bridge in October and 1-1 at Old Trafford in April. United, however, did have an important win over Chelsea in the FA Cup, eliminating the Blues with a 2-0 win in the fifth round.

How To Watch
WHAT: Manchester United vs. Chelsea